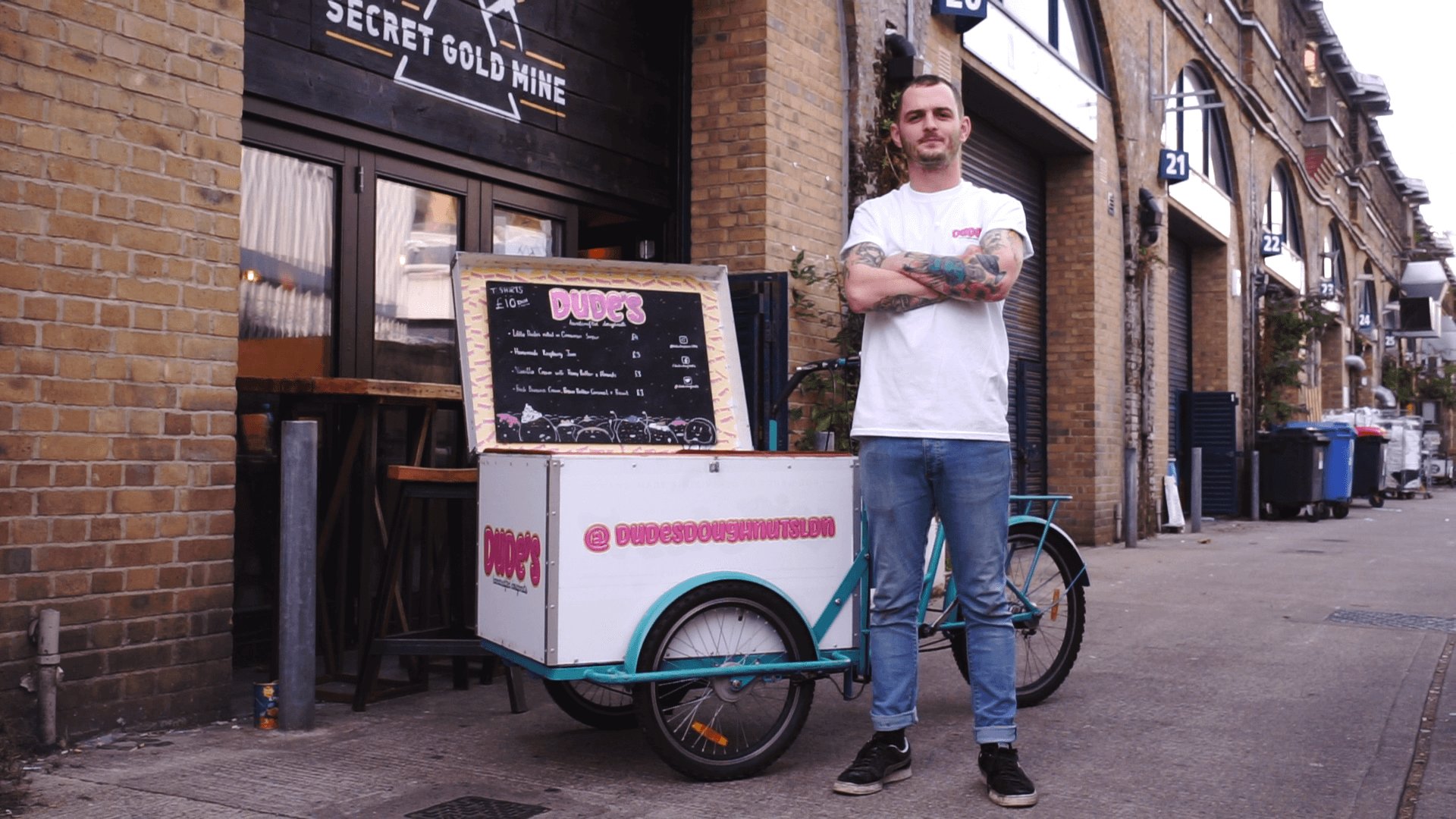 Street food markets and vendors are popping up all over the place, and London is no exception. In fact, last year, the UK’s Office for National Statistics estimated London to have over 5,485 mobile food stands and takeaways employing a total of 38,835 people. Is it safe to assume that the widespread use of contactless card reader’s played a part in this? Probably.

The combination of the industry booming, and people’s standards getting that little bit higher as a result of it, means we’re getting treated to some pretty good food – and we’re not complaining. In comes Dude’s Doughnuts. The independently run business takes a handcrafted approach with a focus on keeping their produce fresh. The result? Some seriously delicious doughnuts hitting our taste buds with flavours from our childhood.

We popped into their shared kitchen space to spend some time with the brains behind the operation, Calum to talk about his journey in the food business. So, get your pen and paper ready and start taking notes; here’s our step-by-step guide on how to convert passion into profit – as told by Dude’s Doughnuts.

It goes without saying, that the key to being successful in your field, both in profit and happiness, is making sure you enter an industry you're passionate about. Then go one step further...find your niche. Specialising in something not only helps you find your ideal market, but it also allows you to become an expert within it. Cutting down doesn’t have to be limiting.

Calum entered the street food and baking industry 6 years ago and somewhere along the way, he found something he really enjoyed making; doughnuts. From that point onward, he knew that eventually, he would be opening up a company that’s prime focus was making the much-loved treats. “It was just kind of a natural progression of where I was at that time.”

Idea in hand, all that was left was to name his new project. “Dude’s actually comes from my great, great grandfather who owned a woodyard in the South of England and he was kind of like the go-to man to sort out all the problems...we were coming up with names, and we spitballed a few names with the family, and it was actually my Mother that came up with the name.”

So, who was his market? ”We found our feet on the Bermondsey Beer Mile (thanks to Moor Beer Co.) and have since started trading regularly at Flat Iron Square on Friday nights as well as Moor's Vaults & Taproom on Saturdays & Sundays. You'll also catch us from time to time at our neighbours, Fourpure Brewing.”

When you’re first starting out there’s going to be things that don’t work as perfectly as you intended them to. That’s ok. Calum overcame his hurdle by hunting down a credit card reader that caters to small businesses.

“We traded for the first few weeks without a card machine and we noticed straight away that we were actually having to turn people away from business because we couldn’t take the card payment. In all honesty to you guys, the fee that’s taken by SumUp per transaction is actually a lot less than some of the other competitors on the market as well, so it’s a lot more, kind of business-friendly for myself who, especially for a startup is always counting every single penny. It was quite clear that SumUp was the company that was probably best for me to use.”

Surround yourself with like-minded people

Multiple studies have been done on happiness in the workplace. A lot of the percentages differ, but one thing remains consistent throughout; happier employees increase productivity and surrounding yourself with driven, dynamic individuals is the way to create that environment.

Dude’s Doughnuts found that space in a shared Bermondsey kitchen.

“Secret Goldmine is a business owned by a guy called Mike who has very kindly opened up his entire kitchen for seven different food businesses in London. These span through sweet pies to pork sandwiches to Trinidad & Tobagonian food, so it’s a real mixture of different cuisines that all get developed underneath one roof. It’s a real positive vibe when you’re in here; you feel like there’s a real doers culture of what’s going on down here.”

Are you a small business looking to enter the card reader game? Want to go contactless? Check out our website for more information on how we can help your business grow.